This post isn’t directly related to the Episode IX Radio Drama Project, but it’s something I thought our audience would enjoy the multiple layers of irony of nevertheless.

Last night I was playing Star Wars: Battlefront II on the PlayStation 4, as I’m wont to do, and as I was enjoying a round of my favorite mode, Heroes vs. Villains, I unlocked the trophy “Choose Your Path”.  If you’re not familiar with the game, or this specific reward, a player receives this trophy when they accomplish the following: “While being marked, defeat 50 enemies in Heroes Vs Villains.” Being marked refers to the player essentially being “it”, the target that the other team will be after.

At the time, I was running around as Han Solo in his unlockable Hoth “Appearance” (which I imagine must’ve made the man quite a bit warm under all that insulation in the jungles of Yavin), when I was rewarded the “Choose Your Path” trophy for eliminating none other than Kylo Ren who was being controlled by the unseen force of a player whose name starts with “Starkiller”.  Choose your path, indeed! I found it all very ominous.

One of my favorite things when I unlock a trophy is when the system actually records a *good* screenshot of the moment I unlock and am rewarded said trophy. I find the timing on this to often be quite hit or miss, no pun intended; but this time it worked out beautifully and I’m happy to share the moment with you all. 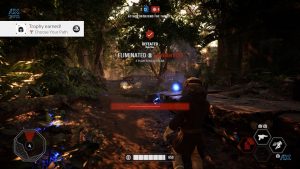 Han Solo takes an ironic shot and gets a trophy for it.

That’s two I owed you, junior. One for Kylo, and one for Starkiller. 😉

Only good things are happening on this site today!

It might be Friday the 13th, but over the past 48 hours EpisodeIX.org has been going through the major changes we had in store for it from the beginning, finally bringing it inline with where we wanted it to be.  This includes unveiling our logo!  Read on to learn more about it, and what we’ve been up to.

END_OF_DOCUMENT_TOKEN_TO_BE_REPLACED

Has it been a week already?!

As hard as it is to believe, Boston’s PAX East 2018 was just last week! It feels both like we just left and like it was ages ago.  Spending a few days immersed in the sights, sounds, and pure zaniness that is PAX will do that to a person.  If you attended this or any previous year’s PAX, I’m sure you know what we’re talking about.

This year, however, “Han Solo” himself was on hand for part of the event to walk the floor, meet the people, and spread the word about EpisodeIX.org to the masses.  If you were at PAX East this year, let us know if you ran into Han!  As you can see below, there was a touch-and-go moment between him and none other than Buzz Lightyear, but in the end, it ended up OK for both of them and they just went after cell phone cameras instead.  Phew!  A noble cause indeed. 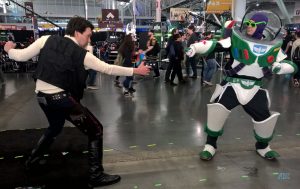 Forget Greedo, the real duel is between Han Solo and Buzz Lightyear!

Han Solo and Buzz Lightyear decided they work better together and take on the tyranny of cell phone cameras.

Thanks to everyone at PAX East 2018 for all the kind words, support, and encouragement we received!

The Force is strong with you!

We’re glad to see you found our little, incredibly unfinished, website!  Although the site isn’t really ready to go yet, we sure are!

But “ready to go with what?,” you ask.  The short answer – an alternative take on what a Star Wars Episode IX could be, as told through an audio format with only storyboards being used for the visuals.  Like a narrated picture book from a long time ago.

This is a not-for-profit project being done to coincide with the 2019 Extra-Life event which raises donations for Children’s Miracle Network Hospitals.  We’re glad you’re here, and we hope you’ll come along on this journey with us.

We’re excited to show and tell you more, but we’ve got more work to do right now, including on this nascent website!  For now, if you’d like to find out more, please sign up for our newsletter, the Commlink, below.  And if you are a digital or physical media artist and would like to volunteer your skills, we would love to have you on-board!  Just make a note of that in the “How did you hear about us” field and we’ll get back in touch with you.

Thanks again everyone for your interest, and may the Force be with you!